First things first. I have to say a big thanks to Russell Beattie for extending me an invitation to Yahoo! 360°, which happened a short time after my last post here. I wasn't expecting it. Second (second things second), it isn't really fair to post a review of something that, A) is in beta and still brand new, and, B) most people don't yet have access to. Still, I figure lots of folks are curious about Yahoo360; and Yahoo360 workers are probably curious to see the reaction of early users. So, here goes with a brief review.

I spent most of last night and virtually all of today playing around with Yahoo360. Well, not ALL day, exactly. Rather, I spent equal amounts of time in Yahoo360 and answering email. The email was from people in my address book that I hadn't heard from, in some cases, in years - people I'd sent a Yahoo360 invite to. They wrote to me after accepting the invitation and looking inside.

Have your own look inside. My Yahoo360 address is http://360.yahoo.com/dougthacker. Here is a screenshot of the page you'll see when you click on that link. 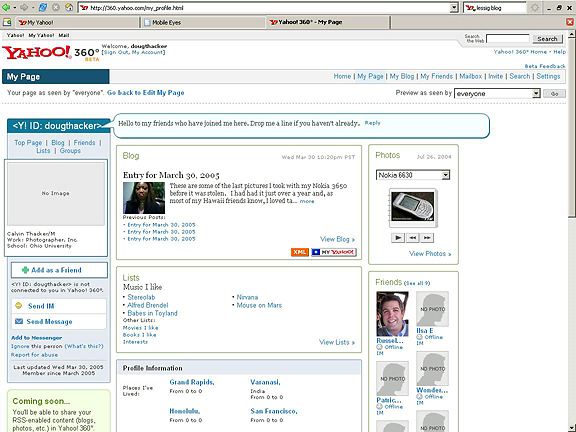 The components of Yahoo360 are Music sharing, of a kind, is also offered by Yahoo360, and it could be considered another major component. This feature consists of the (supposed) ability to share your Yahoo LAUNCHcast Web radio selections. I'm using Firefox as my browser (as most everyone should be), and here's what happened when I tried to launch LAUNCHcast: I got a message saying, "LAUNCHcast doesn't support Netscape on Windows." Not sure why it thought I was using Netscape, but obviously this is something that needs to be fixed - and no doubt it will be. I thought maybe I'd already tried LAUNCHcast some time back, but couldn't remember. Obviously, though, I won't be trying it currently until this little problem is addressed.

The Yahoo360 blog is right now pretty limited. You can't write your own HTML, and you can't link images from other sources on the Web. Instead, there is a WYSIWYG interface you have to use for posting - I suppose this is meant to make things easier; and images can only be uploaded from your mobile or your hard drive - and only one per post. This single image is inserted at the top of the post, and can't be moved around by you. 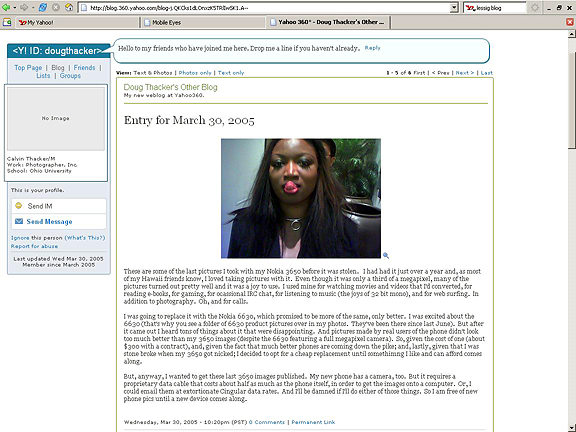 I guess I don't have a problem with this limited functionality - it forces you to write personally and not rely on illustrations. But, really, you could hardly call it a blog, if we take "blog" to mean what it means here on Blogger, and virtually everywhere else. Namely, a kind of self-published electronic newspaper written by one person (or a group of people). The Yahoo360 "blog" is definitely not that. A more descriptive term might be "online journal". But since "blog" is a big buzzword right now, Yahoo will persist in calling it that. And because they will, it's going to lead to unrealistic expectations on the part of users who have experience with blogs elsewhere - even if it's only experience reading them. ("So how come I can't post pictures like they do on BoingBoing?") Unrealistic expectations will mean frustration and disappointment for a significant number of users. 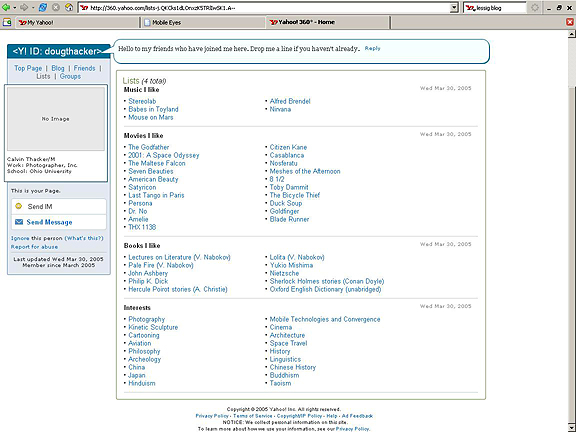 Unless you're in the habit of doing it, it's a challenge to come up with lists of favorite things ("snowflakes that fall on my nose and eyelashes, brown paper packages tied up with string") - especially when we're not talking about just any old favorite things, like in the Rogers and Hammerstein song, but more specific categories like books and movies. It works best, I think, when you're straightforward about it. But I guess that goes without saying. I noticed that many people are listing things that don't fit the tight categories - authors under "books", for instance. It would be better, I think, to call the category "Books and Authors", as done in the profile section of FLICKR.

Fortunately there is (just as on FLICKR) a broad category: Interests. This leaves plenty of room to list things like "Girls in white dresses with blue satin sashes" (though my own proclivities are a little less specific than that). But Yahoo360 might want to consider implementing their other categories as FLICKR has: Favorite Books & Authors; Favorite Movies, Stars & Directors; Favorite Music & Artists. Something like that.

As I said on my "blog" over on Yahoo360, I've always been ambivilent about listing favorites in public. Ambivilent for lots of reasons. But I really grokked what such lists are about, while on Yahoo360. Lists are nothing more than a way of tagging yourself, just as you would pictures on FLICKR. And it serves the same function as tagging anywhere. When you want to know which members of Yahoo360 are into the music of, say, Stereolab, you click on the Stereolab tag in your own list, and voila, you're presented with Yahoo360 users who have tagged themselves Stereolab fans. 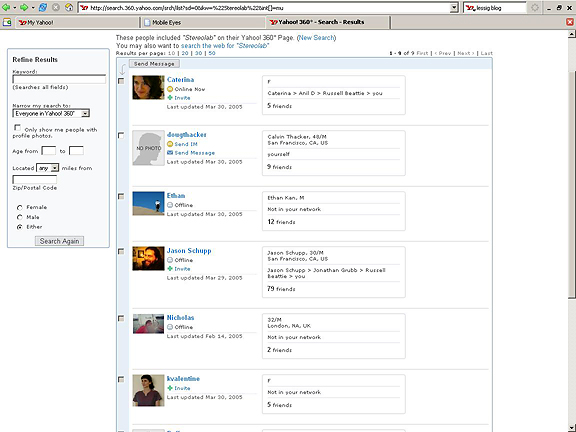 Yahoo360 also features some components that might be called minor ones, but that, together, give the service more depth and likability. One is reviews, wherein a user can present the reviews he has written on other Yahoo sites, as well as adding new reviews. Outside of the weblog you're reading right now (Blogger based, of course), I'm not particularly into writing reviews, and won't lay claim to the few lame attempts I've made. But I can see how this would be of interest to some users.

Also, in addition to tying in its own Instant Messenger service to Yahoo360, the site provides a means for contacts to leave messages directly within the interface. A number of my contacts have already done this. I was able to respond in kind; and the whole thing seems pretty useful, since it means not having to fire up your own email - especially for those contacts who don't use Yahoo Mail.

One minor feature I particularly like is called Blast. Blast consists of a short blurb, or, if you like, a link, that you can send to friends and display at the top of your Yahoo360 pages. This seems like a good way to keep your pages active, and to draw attention to updates.

There are a couple of things I might change, if I could - and maybe they will be changed as we go along. For example, after putting considerable thought into my list of favorite films, I finally posted it, only to be told it was too long. Something about a 300 character maximum, I think it was. Needless to say, I didn't count characters. I just lopped a few films off the bottom and kept my fingers crossed. Such a limitation seems kind of silly. If someone wants to list, say, their top 100, who cares?

Likewise, I'm in 35 Yahoo groups. But a maximum of 23 appears on my groups list. And at least one of the groups - devoted to the work of photographer Helmut Newton - is in the so-called Adult section of Yahoo groups. I have a feeling that one won't ever show up on my Yahoo360 page. Is that because we're not adults, unless we're in the adult section? What's up?

But all of this is really just niggling. The bottom line for the broad concept of Yahoo360 is that it's a pretty great thing. The idea of creating and expanding networks of people with whom you share interests, and of becoming reacquainted with old friends, is really exciting. And, more important (because lots of sites have the idea but not necessarilly the execution), the way Yahoo has it set up - its implementation - is, in general and despite the little problems, quite effective. Part of this effectiveness - a big part - is in my view the total lack of ads. This gives Yahoo360 a very FLICKRish feel, and I can only hope Yahoo has the sense to maintain it this way.

In fact, Yahoo would in my view be well advised to tie in even more closely FLICKR and Yahoo360. Especially where photos are concerned. It might also be a good idea to add tagging to their new My Web feature (elsewhere on Yahoo), to make it similar to del.icio.us. And then tie it in with Yahoo360. This would be in keeping with the essential social networking nature of Yahoo360. I could see a "My Bookmarks" section. Or even a "My Tags" section that applied to both bookmarks and photos.

Anyway, as it stands now, even in beta, Yahoo360 is nicely done, and I intend to keep using it (unless I start getting spammed with ads). I think it's going to be a huge hit.